The Shire of Northampton has established a quality and affordable campground there.

Access is off George Grey Drive. Turn on to Balline Road (dirt) and drive 4.5 kilometre to the Ranger Station. The ‘Lucky Bay’ directional sign on George Grey Drive needs to be a LOT bigger. 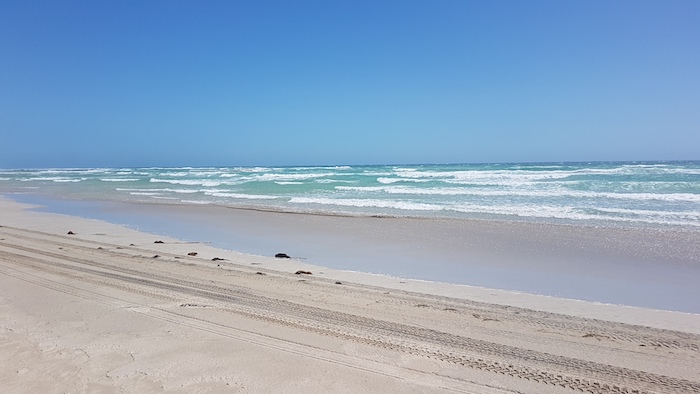 The cost of camping is $15 per vehicle per night and there are literally hundreds of bush campsites – some better than others. We found a beautiful site replete with 100 m2 of grass that was somewhat protected from the wind. 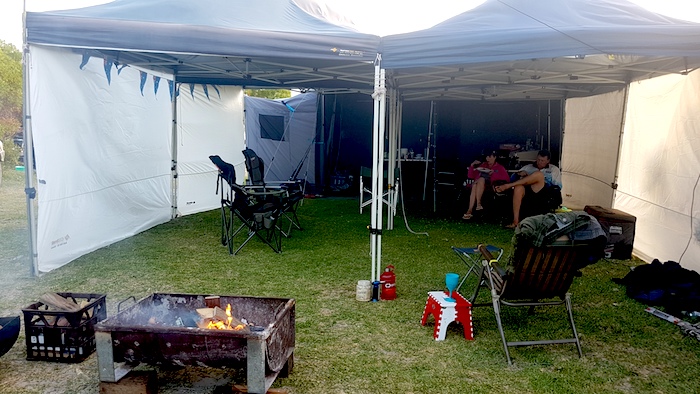 Our camp. The walls on the gazebos were particularly welcome while the wind was howling for the first two days.

There are plenty of modern, well maintained ‘long drop’ toilets conveniently located throughout the campground. Skip bins for rubbish are everywhere. All-in-all it is a well serviced, basic campground that will appeal to people looking for a minimalist stay on the coast. The staff are very friendly, helpful and accommodating.

No shops, no noise other than the wind and the sound of waves crashing onto the beach, intermittent and erratic phone connectivity only, easy access to a beautiful white, safe swimming beach and a fringing reef enclosing pristine waters, acres of exciting dunes to explore immediately adjacent to the campground, and 4WD access on the beach north for 20 kilometres and south for 35 kilometres.

Fourteen people in nine vehicles journeyed to this idyllic spot for a break ranging from three days to a week surrounding Australia Day.

The length of the fringing reef can be seen from the top of the extensive dunes.

Tyres need to be deflated to 20psi (or less) and 4WD engaged to get to the beach (campground rule – and a necessity).

The fringing reef is only 80 metres offshore and runs two kilometres to the north where it connects with the beach. At this point one can walk onto the reef and, with due regard to the tide, safely and easily harvest delicious oysters that couldn’t be more fresh, or just wonder at the myriad marine life that spreads hundreds of metres to the south.

The protected lagoon was only only a two kilometre drive on sand tracks from our campsite.  Matt had set a craypot when he arrived on Monday but we decided to relocate it. The substantial wind-whipped waves inside the reef made it a tricky operation, particularly once the counter-balancing weight of Matt and the pot went over the side of the dinghy. 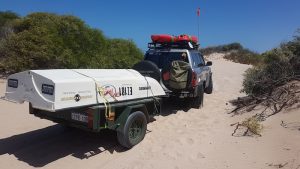 Aaron towed the trailer through the dunes to the beach. 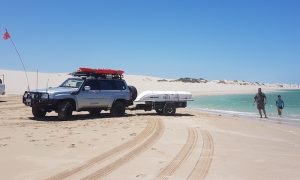 We launched the boat to relocate the craypot.

Parked above the high tide mark.

Easy drive along the beach to the end of the lagoon. 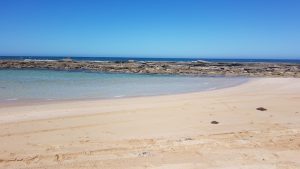 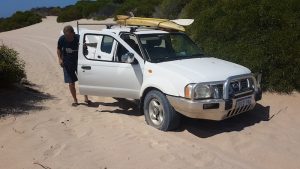 Kerry and his Navara.

At the northern end of the lagoon – our destination every morning to check the raypot and get a feed of oysters.

A feed of oysters was available for anyone who wanted the (small) effort. 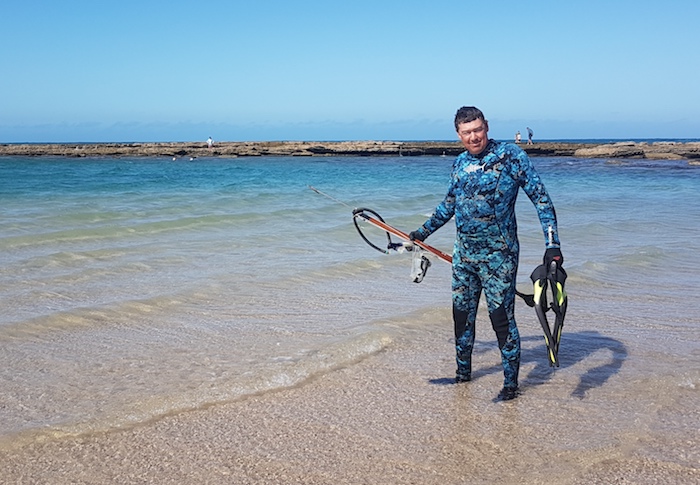 Matt about to go snorkelling. 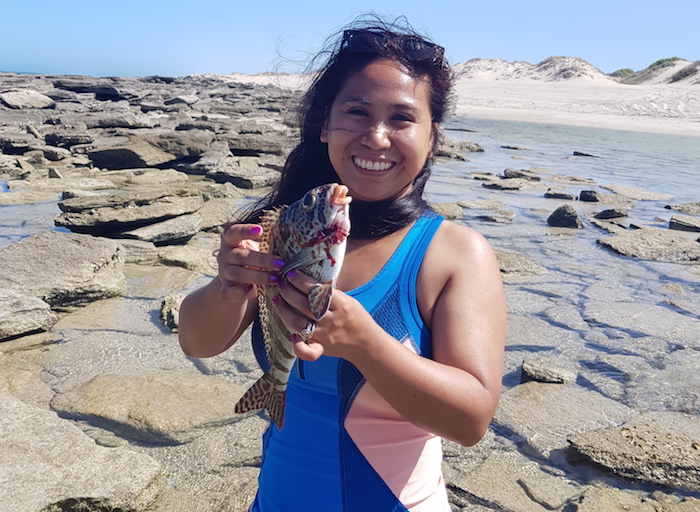 Cherry with the catch.

Matt saw plenty of crayfish while diving but only one was enticed into the craypot.

Pristine white sand dunes extend north-south for nearly a kilometre only 50 metres back from the beach.

Adi in his Jimny leads the vehicles across the Lucky Bay dunes. 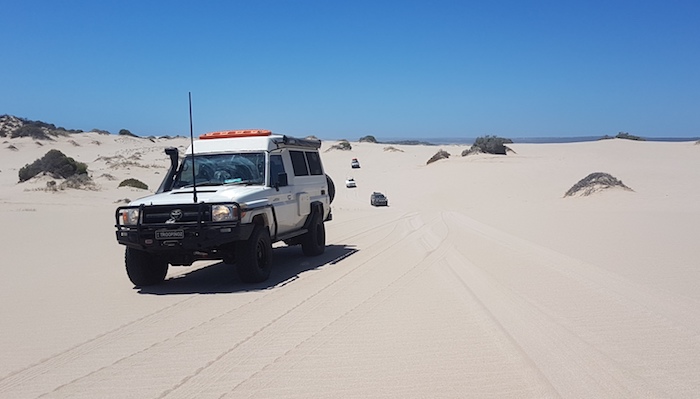 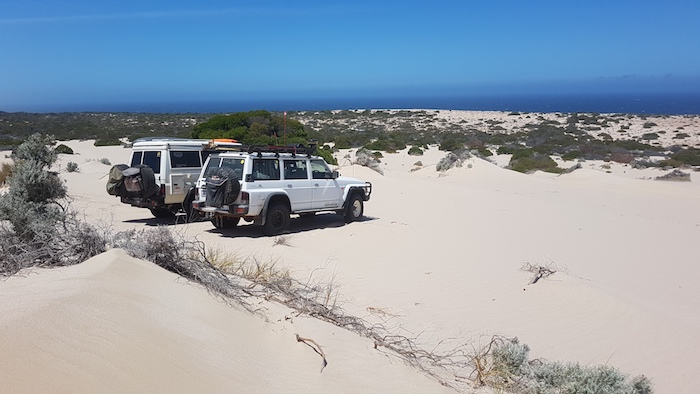 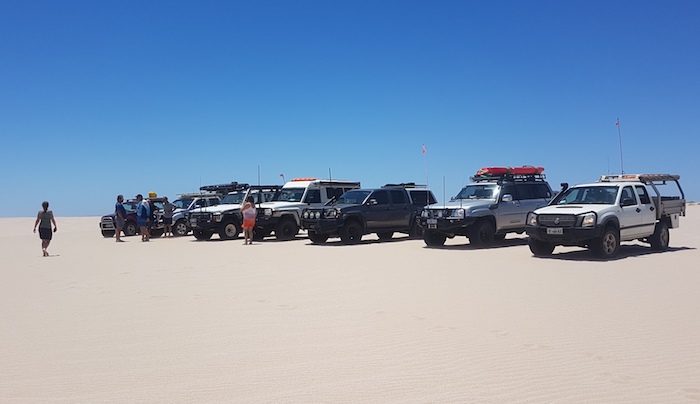 To Kalbarri Along the Beach

The beach was impassable 19 kilometres north from Lucky Bay so we took to the dunes that parallel the beach for most of the way, in the hope of finding a way through.

Some of these dunes are quite high and steep.

Matt stands at the bottom of a large dune.

Aaron and Liam in the Patrol.

Tony and Cherry in their Navara.

Brad and Julie in the Troopy. 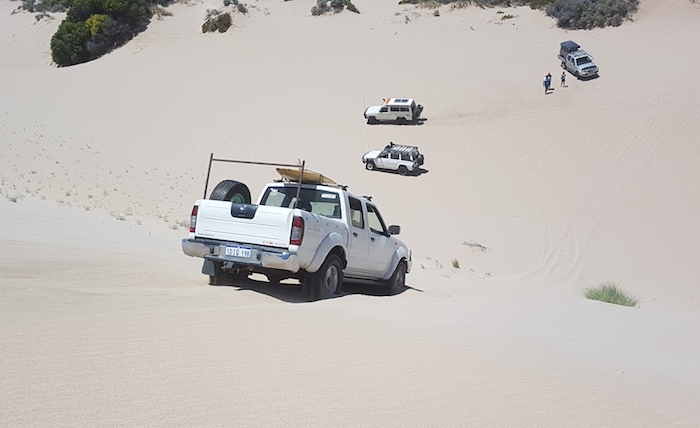 Kerry takes his Navara down the dune. 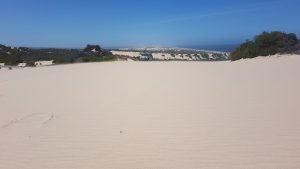 Jeff and Micaela in their Prado cresting a dune. 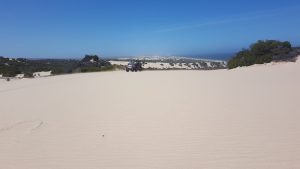 Adi in his Jimny.

Matt did a great job in scouting a way through the myriad dead ends and drop offs.

Sean takes his Colorado over a dune 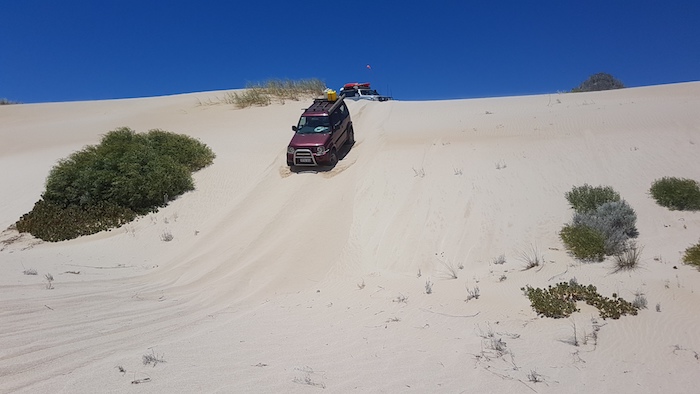 Adi takes his Jimny over the dune.

Some dunes were higher than others.

Aaron in his Patrol at the top of a dune.

We eventually exited from the dunes onto a dirt track that leads to the Natural Bridge, the southernmost of the spectacular coastal gorges south of the town of Kalbarri. 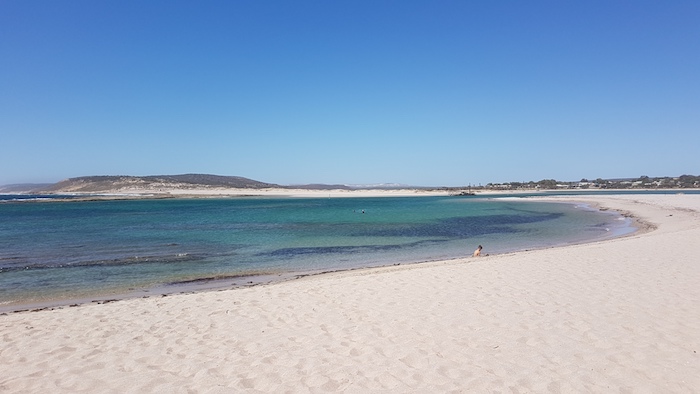 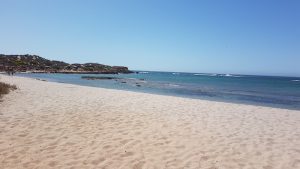 Chinaman Beach at the mouth of the Murchison River.

Some took the opportunity to visit the Kalbarri Gorges. It was very hot – mid forties. The Loop Walk at Natures Window was closed because of the heat. 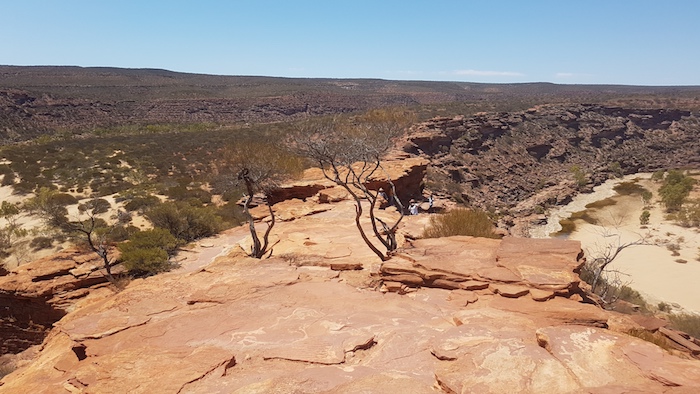 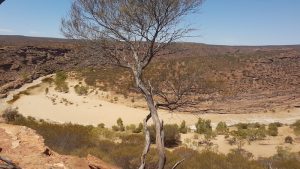 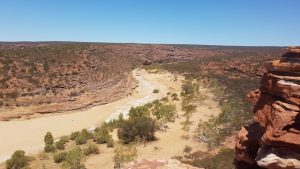 The Murchison River at The Loop.

On Australia Day itself we headed south along the beach, intending to go past Port Gregory as far as we could.

Approaching Broken Anchor Bay the beach sand was tinged red. This is caused by garnet from the nearby mine.

The GMA garnet mine near Port Gregory was started 35 years ago and has since developed into the world’s biggest and most advanced garnet mining and processing operation. The dune sands near Port Gregory contain the highest quality garnet available anywhere in the world.

After 28 kilometres, at Broken Anchor Bay, rocks block the way south. We returned to the mouth of the Hutt River and found our way out to the Port Gregory Road. Tyres were re-inflated for the drive to the Horrocks dunes. We found an entry point into the dunes five kilometres before Horrocks, pulled in to a gravel clearing, aired down and drove up onto the dunes.

Northern end of the Horrocks dunes.

Part of the Horrocks dune system.

Kim’s rodeo on the Horrocks dunes.

Overlooking Little Bay with the Menai Hills forming a bluff. 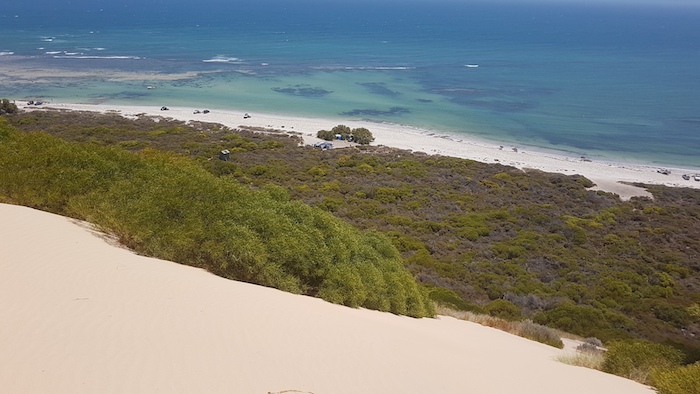 We spent some time trying to find a way out of the dunes onto the beach, eventually coming out close to Little Bay campground, four kilometres north of Horrocks. 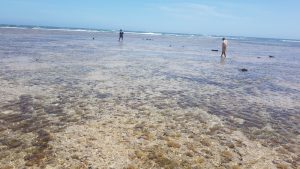 Tony and Cherry on the reef 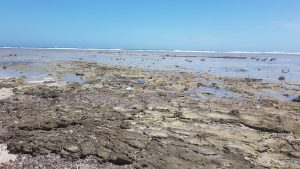 Birds perching on the reef at Little Bay.

After lunch we drove north-east along the beach until our way was blocked by the Menai Hills.

End of the beach. 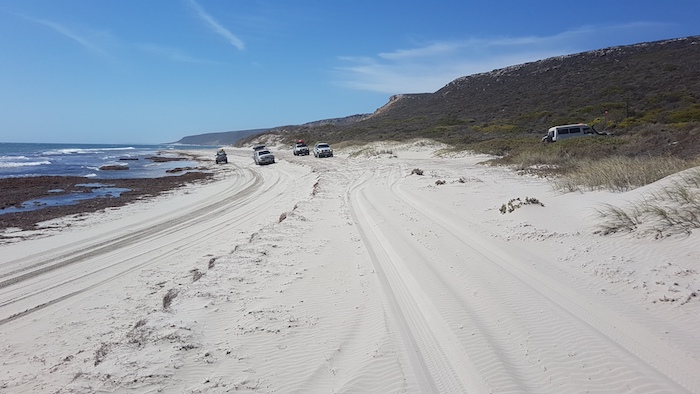 Returning from the end of the beach.

Brad and Julie leaving Horrocks Beach in the Troopy 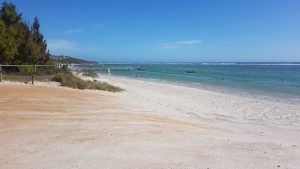 At Horrocks we aired up and returned to Lucky Bay via the bitumen, calling in at Port Gregory Pink Lake along the way. 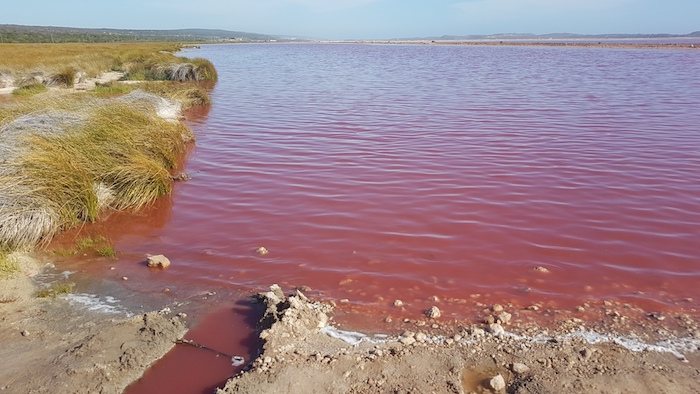 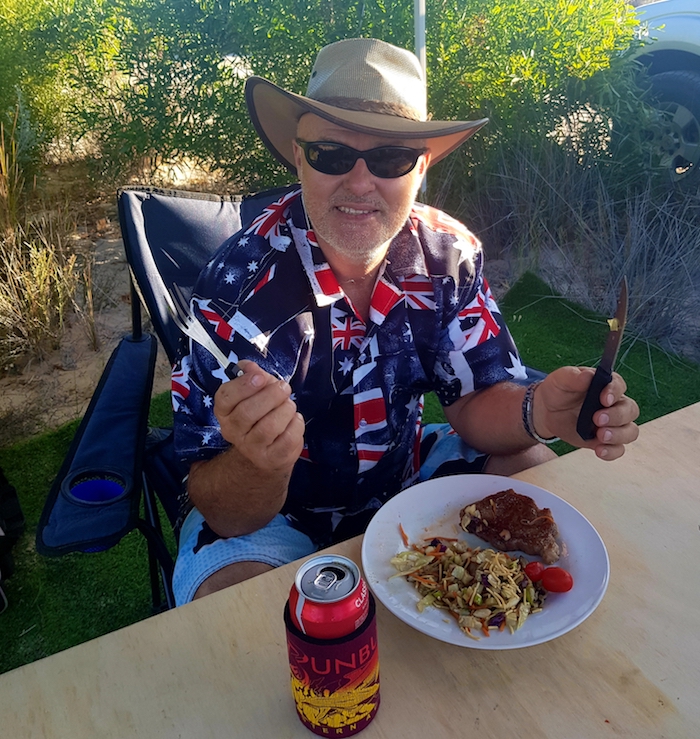 It’s Australia Day but Tony is not eating lamb.

On the journey home we stopped at historic Lynton. Convict Hiring Depot. It was established in 1853, primarily to provide a labour force for the Geraldine Mine and the pastoral stations in the vicinity.

Wonder which way the wind blows?

© Kim Epton 2021
Feel free to use any part of this document but please do the right thing and give attribution. It will enhance the SEO of your website/blog and this website.
1282 words, 63 photographs.
See Terms of Use